What Is The Grand Jury?

The Constitution of California requires that every county impanel a Grand Jury each year. The Grand Jury is an arm of the judicial system, but acts as an entirely independent body. In Yolo County, the Superior Court impanels nineteen jurors. California grand juries are unique as their primary responsibility is to investigate civil matters. Juries act as oversight bodies for county and city governments and also have responsibilities in certain criminal matters. Superior Court Judges, the District Attorney, County Counsel and the State Attorney General act as advisors to the Grand Jury.

Much of the Grand Jury’s effectiveness comes from the viewpoint of its members, fresh and unencumbered by prior conceptions about government. Jurors enjoy a uniquely sensitive position. This enables them to not only gain considerable knowledge about government functions, but to recommend constructive action to improve the quality and effectiveness of local government.

The Grand Jury studies the workings of city and county governments including special districts, groups and/or organizations that receive public funds. The Grand Jury is an investigative body; it has the power to subpoena and indict, but does not have the power to prosecute. Investigations may lead to criminal indictments.

Criminal investigations are a smaller part of the Grand Jury’s work in California. In some states all persons accused of felonies must be indicted by a Grand Jury before being tried. In California, the vast majority of criminal cases are presented directly to the court. A California District Attorney may choose to bring certain criminal cases before the Grand Jury. In such cases, the Grand Jury does not determine guilt or innocence, but whether the evidence is such as to warrant charging the person with a triable offense. The case then goes to the court. The Grand Jury does not have the power to issue injunctions or punish by way of fines or jail terms.

Candidates are screened by the Yolo Superior Court. Grand jurors are selected by random draw just prior to July 1.

To qualify for Grand Jury service, you must meet the following requirements:

Grand jury service is important work and a considerable responsibility. It is also an exciting opportunity to serve your community and learn more about local government. It can be an incredibly rewarding and satisfying experience.

Grand Jurors serve for a one-year term, from July 1 through June 30. Grand jurors should be committed to serving the entire term. The estimated time commitment is approximately 25 – 40 hours per month. Generally, two grand jury meetings are conducted per month, usually in the evening. Additional committee meetings may sometimes be scheduled during business hours. There are two training opportunities for Grand Jury service. One half-day session takes place in Woodland just before the new term begins. Another one to two-day seminar, sponsored by the California Grand Jurors’ Association takes place in the Sacramento area soon after the new term begins.

Link here for a Grand Jury Application July 1, 2020 - June 30, 2021 (note: application will be made available during the filing period, January-March), or write to this address:

At the completion of the one-year term, the Grand Jury submits a final report that details its investigations. The final report is usually made public on the last day of June. The Grand Jury may submit additional reports throughout the year. Reports contain findings and recommendations, and lists those who are expected to respond to each of the recommendations. Link here for Grand Jury Reports.

Elected officials must respond within 60 days; all other boards and officials must respond within 90 days. Copies of the Grand Jury Final Report are made available to all public libraries, county and city officials and the news media. Reports are often inserted in the local newspapers. The report and its distribution serve to inform the community about Grand Jury activities and findings.

Grand Juries make their own determinations about which governmental departments to review, although the law requires that some departments be reviewed annually. In addition, citizens, local government officials and government employees may submit complaints about the action or performance of public officials and public agencies. 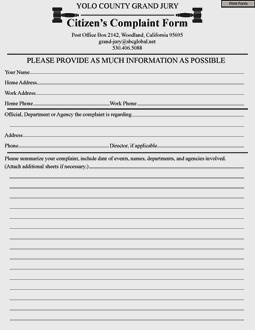 Click here for a Grand Jury Complaint Form, or write to this address: